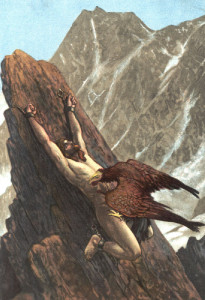 Standing up in front of you is like walking on fire,
and that’s my passionate muse and my deepest desire.
I teach and share, to break down limitations.
I lay myself bare – In Truth – Inciting transformation.

I keep this sacred flame, that never grows cold,
and I make no claims on this flame I hold.
The light of divine consciousness arising within man,
Burns at White Spring, cavernous, within this sacred land.

And I nurture yet another flame, smouldering ember in my heart.
Breath of muse ignites a blaze, to stand me here playing the bard.
Well it’s the legend of Prometheus, I’ve got to play my part,
and when I check in with the Awen – I find something to impart.

Always reaching for the light, that bold Prometheus,
Refused Titanic fight spared the jail in Tartarus,
He spent night after night, with his brother Epimetheus,
Shaping man after might, in name of his love.

And so by his design, and his love for all humanity
He shaped mankind, then; no mere technicality,
Athena was consigned, to breathe life; mortality.
Human being was defined, but what of personality?

Endurance, strength and nerve, an afterthought to give,
To the creatures of the earth, Epimetheus’s gift,
but it never does occur, to give humankind a lift,
and Prometheus observes this rift.

Epimetheus’s cup had nothing left for man,
The animals all supped from the lion to the lamb,
but we were snubbed in favour of his plan.
So Prometheus stood us up and the resistance began.

He felt his love for humans like fire in his brain.
And under no delusion he nurtured tender flame.
To bring it to his people to rise against their pain.
And a way to keep all of us warm in wind and rain.

Zeus declared that sacrifice must be more robust,
He took the best of the flesh and left the rest for us,
So Prometheus did a trick and the jape was later sussed,
and with only bones to pick, Zeus took fire, left us dust.

Prometheus flew higher than Icarus, and even though it stung,
with treachery vociferous he lit a torch from the sun.
Imagine the aurora! Yes! Zeus was set to stun.
He sent pretty Pandora, deceptive heart and lying tongue.
And a funny looking box that should never be undone
Oh, what a stunning beauty, was sent to live among
Athena, Epimetheus, Prometheus and us.

Pandora’s curiosity, was bound to do us in.
Her apparent generosity was not to be boxed in.
And she unleashed an atrocity of suffering and sin.
and all manner of monstrosity to get under our skin.

Now it is debatable, who left us with false hope
so we could be capable, to cope.
Was it he in chains unbreakable, or that dope,
of a woman unobtainable who revealed the boxes scope.

Yes, he in chains unbreakable. The last part of my tale,
Prometheus unmistakable apparent epic fail,
Made his freedom unsustainable, his passion was curtailed,
He was seized by Gods unshakable, chained on Caucasian Jail.

Then Zeus gave two conditions, his freedom to be met,
If he could proposition and somehow get,
An immortal volunteer to agree to be dead,
And a mortal so sincere to destroy the daily threat.

Then in walked tender Chiron and brave Heracles,
The trickster may find asylum with God’s such as these.
With a sweet surrender and sudden irony,
wounded healer and defender died with notoriety.
It was no small labour, but the mortal killed the bird,
And unchained poor Prometheus … at least that’s what I heard.

Until today,
When I met him on the bus!
Yes, I know it’s an unlikely place for people like us
Still, I took the chance to ask him, why Prometheus?
And he told me …

I Prometheus, wild adversary,
Thief Immortal, paradoxical trickery.
I bring you Fire! I offer Power!
Bring you liberation, to create or to devour.

I Titanic traitor chained unto a stone.
Bird satiater, cursed to live and die alone.
Yes, my fate was always marred, the gate to Olympus barred,
permanently scarred, and on what charge?

My unrepentant, holy burning heart.
He despised my cunning, he shunned my art,
Why? Because I dared!

Bound in chains, my Olympic fall from grace.
Each day an eagle’s feast, my sacrifice to warm your face.
Why? because I cared!

And a thousand vestal virgins, do not do me honour,
and a million clay built humans still shun the sacred fire.
Why?

You heard me! I gave up what I got!
I suffered and I sacrificed, for what?!

I conspired, I inspired you to take charge of your own,
to stand against authority, to take wisdom gods have known,
And now little metal boxes warm your heart and heat your home,
Orange coiling filaments, light switches. Flame dis-owned!

And you choke in the smoke of your ill fed bonfires.
Eyes burning acrid; blinded by fools and liars.
And like Zeus, you bind me! Another rock to sit upon
You stand me in eternal golden form, beside your temple to Mammon.
Rockerfella wraps me in a zodiacal chain,
To witness your torture again and again.

You take my fire, run it round, with a corporate charade,
New World Order bound, coca-cola reign on your parade!
Five rings for the race of man, five rings of fire ascend,
An Olympic spell with one to rule them all, one to pretend.
A million eyes gaze on the screen, open to suggestion.
‘Go back to sleep,’ they say. No need to beg the question.

All you vacant vestal virgins wear about your neck, false chains.
And my deluded clay creations. You know nothing of my pains.
Do you.
Or do I judge too quick?

Will you awaken from the eternal torture of your soul?
Will you break the chains that bind you before your liver is sold?
Will you tend a sacred flame? Will you keep it pure and clear?
Take the power of my prophecy to those who would hear!

Will you light a simple fire, to sit by with your friends?
Will you grasp your sovereignty? You have a planet to mend.
Do you dare to burn and sack your Gods of corporation?
Do you care to claim back? Reinstate your sovereign nation!

I Prometheus,
A living mythology.
In the darkness of mystery,
I leave with you my history.
Complete it!