Rules of entry to the Bardic Trials

Guidelines: The catchment area is defined as the distance that the Bard can reasonably be expected to walk into Glastonbury, perform their duties and return home again within the daylight hours. This is reckoned to be somewhere around 12 miles radius from the Tor. Contenders are expected to have been resident in the area for at least a year and a day.

What the judges are looking for in the contenders

Points awarded from 1-5 for each quality and an additional point may be added or subtracted for ‘relevance’ and ‘audience’. There is a minimum number of points that the winner must get in all categories, in order to ‘be deemed to have met the standard,’ which is at least three points in each quality; the final tally is a guide to the judging process. The judges are also looking at Bardic relevance and understanding and the whole picture of the performance in context; in particular the judges should be looking to find a balance between the calibre of the performance and the quality of the words. It is also important that the incoming Bard is able to “bring something to the role”.

Bards are primarily judged on their use of words, but other musical and performance skills may also be considered as relevant. Entries may be in the form of song, story and poetry up to 15 minutes long; contenders will be marked down for going over the time-limit.

The Crown and Fool’s Cap were retired for the 2017 contest. New prizes will be introduced for additional competitions starting with The Silver Pen in 2018, which will be awarded for written entries on the theme.

Responsibilities of the Chaired Bard 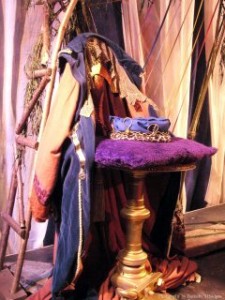 The primary responsibility of the holder of the Chaired Bard is to ensure the advancement of the Bardic Chair of Ynys Witrin by presiding over the organisation of the next year’s contest, attending Bardic Council and Gorsedh Committee meetings and handing over the title on St. Dunstan’s day of that following year. Beyond that the Bard may be called upon to perform in public. The area of jurisdiction is defined as being ‘Within walking distance of the Tor’. That is, the distance one can be reasonably expected to walk, perform one’s duties and walk back in a day.

The tenure of each Chaired Bard is 1 year and 1 day; this means that on St Dunstan’s Day itself there are actually two Bards, the outgoing one and the new one.

The post is largely an honorary one. The purpose of the award is to honour the best wordsmith in the community who chooses to compete for the Chair. It is up to the recipient of the prize to assist in the elevation of the word and promote the Chair in a manner appropriate to the position. The Chaired Bard may decide to include the following suggested roles among their duties. Where the incumbent is either unwilling or unable to fulfil any of these duties it defaults to the Gorsedh Committee to appoint a deputy drawn from the lineage of accepted Bards. A time limit may be applied in such cases.

The Chaired Bard may:

Choose the theme for the contest;
Invite five people to judge the trials;
Serve as a Judge themselves;
Perform the Awen initiation ceremony to bring new Bards into the College;
Help to prepare graduates for initiation;
Use the title “Chaired Bard of Ynys Witrin” for all public performances they make during the year as well as use the title in their promotional materials.

We hope that the Chaired Bard is able to act as a cultural ambassador for the town of Glastonbury and its surrounding area.

The Silver Pen is awarded for written submissions. Entries should be no longer than one side of A4 with the title and the piece only. Another A4 page with just the title, your name and contact phone or email. To be put in a sealed envelope and handed in at the interval on trials night, 13th May, Assembly Rooms. Free entry. Must be on the theme, Mirror of Avalon. Entries will be invigilated by Tony Atkinson, then judged anonymously by the previous winner. The prize is the title of Silver Pen of Ynys Witrin Winner, as well as a sterling silver pen.

Criteria for acceptance of new Bards into the College:

We plan to accept members as Ovates on a similar basis; prospective members must demonstrate competence in their chosen discipline of seership to the satisfaction of the Elders.

One thought on “Rules”