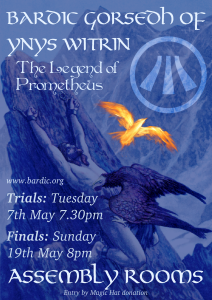 This year’s contest for the Bardic Chair of Ynys Witrin was won by Lisa Goodwin. The crown was awarded jointly to Harmony Davies and Hugh le Provost; Richard Field won the fool’s prize for the second year running and the Tim Sebastion Memorial Trophy was awarded posthumously to Graham Coles. The standard of entries was higher than ever and the atmosphere for the Finals was electric.

We had a gorgeous Gorsedh ceremony on Sunday afternoon – the weather held off ominously overhead. It is with great sadness we remember the passing this year of Graham Coles, Glastonbury’s Town Crier and Honorary Bard and Nikki Dorakis, who provided valuable magical support in the initial setting up of the Gorsedh. Gerry performed her duties admirably, initiating seven new Bards and graduating to Elder herself. We would like to welcome Thalia Brown – *Lady of Avalon, Senga Skylark, Duncan Batey, Steve Astronaut, Lisa Goodwin, Jeremy Bull and Hugh le Provost as new members of the college. It was lovely to have the Mayor attending this year and it was a profoundly moving experience to welcome Geoffrey Ashe as an Honorary Bard. I shall treasure the look on his face for years to come! Thanks to Lydia Lyte (Swordbearer), Denise Michell (Elder Druid) and Shamus Joy (Herald) for holding the energy of the ceremony so gracefully. It was great to be able to chill out at the Buddleia Bar afterwards and ground the energy with some mouth-watering cheesecake!